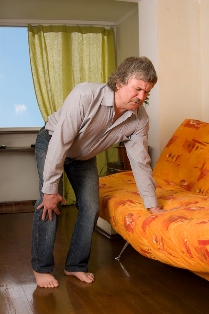 Both falls and osteoarthritis are common for elders, making them at high risk

Knee osteoarthritis (OA), characterized by joint instability, muscle weakness, pain and stiffness, remains one of the leading causes of disability in the elderly population (over 65), and its occurrence rates only increase with age. One popular intervention is knee replacement surgery, which has been shown to provide pain relief and improve function and quality of life (QoL). Another common issue for those over 65 is falling, with some reports showing one-third of elders falls every year. To make matters worse, when put in conjunction, knee OA is considered a major risk factor for falls, as those with knee OA fall more regularly than those without it. Despite this association, and other similarities between falls and knee OA (e.g. experiencing pain and neuromuscular deficits), few studies have investigated their connection in regards to surgery. Therefore, a study was created that assessed the risk of falls for people with knee OA before and at four months following knee surgery.

Participants for a surgical group and a control group were recruited, and the surgical group came to consist of 35 patients with knee OA scheduled for knee replacement surgery and included only if they could walk 150 ft. independently. The control group included 27 asymptomatic participants with no diagnosis of OA or history of knee problems. In addition to demographic characteristics, all participants were assessed for QoL, physical function, knee pain and stiffness, physical activity levels and fear of falling prior to the intervention and then four months after surgery. All participants were also asked to record the number of falls they experienced 12 months before and four months following surgery.

Results showed that 48% of the surgical group reported at least one fall in the 12 months before surgery, while the control group reported only 30%. Though minor improvements were found in pain, function and stiffness for the surgical group, they also showed less knee extension strength, poorer lower limb proprioception and a reduced quality of life before and after surgery compared to the control group. In addition, the surgical group presented a greater fear of falling than the control group pre- and post-surgery, and though the fear reduced slightly, it was still higher than the control group. Taken together, these outcomes show that those with knee osteoarthritis who undergo surgery generally experience more falls than others, and may also be more likely to have a higher risk of falling due to deficits in strength and proprioception as well as a greater fear of falling. Therefore, special care should be given to elderly patients, and fall prevention interventions should be implemented immediately after knee replacement surgery to reduce the risk of falls.

-As reported in the July '11 edition of Knee Surgery, Sports, Traumatology, Arthroscopy