Many patients found to have back conditions despite lack of symptoms 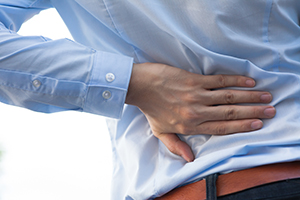 Low back pain (LBP) affects about 80% of the population at some point, and it's associated with major economic consequences. Advanced imaging tests like magnetic resonance imaging (MRI) and computed tomography (CT) scans are becoming increasingly common in to evaluate these patients. These tests often reveal back disorders such as disc degeneration (a condition in which discs in the spine begin to wear away) that are interpreted to be the cause of the pain. This may lead to surgical procedures and other treatments that may not be necessary and sometimes fail to alleviate symptoms. The fact that some people can have abnormal findings on tests without having LBP symptoms helps to explain this. But to get a better idea of just how many people fall into this category, a powerful systematic review was conducted on all relevant literature on the topic.

Three major medical databases were searched. Researchers looked for studies that recorded the prevalence of abnormal spine MRIs and CT scan findings in different age groups of people with no history of LBP (asymptomatic individuals.) Of the 379 articles identified, 33 met the criteria and were analyzed. Of those, 32 reported information on MRIs and one reported information on CT scans.

Abnormal findings are common and often a result of aging

Results showed that 37% of asymptomatic individuals ages 20-29 had disc degeneration. This figure increased to 96% of 80-89 years old, which shows a major increase in prevalence with age. Another abnormal finding called disc signal loss, which is similar to disc degeneration, was found in 54% of asymptomatic individuals 40-49 years old and 86% of 60-69 year olds. Similar trends with prevalence and age were noticed with other findings as well. This systematic review makes it very clear that a large percentage of individuals without any LBP symptoms display abnormal findings on imaging tests, and this increases significantly with age. This suggests that many of these issues may be due simply to the aging process and have little to do with symptoms of LBP. It's therefore extremely important to interpret results from these tests with caution and keep this review in mind when making any treatment decisions.