Combination of therapy, exercise and education is best for neck pain 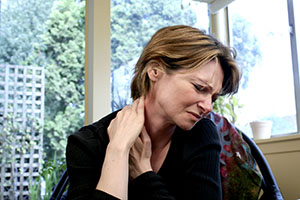 Nonspecific chronic neck pain (CNP)-meaning the pain has been lasting for at least 12 weeks and there is no specific cause identified for its development-is a common condition in which patients typically deal with high levels of disability and pain. Some people may also experience psychological issues like depression and anxiety. Popular treatments such as exercise and manipulations by physical therapists are known to be effective for CNP, but it's been suggested that education is also needed to address these psychological issues. Unfortunately, there is not much evidence on the role of patient education in treating patients with CNP. Therefore, a powerful study called a randomized-controlled trial (RCT) was conducted to determine how effective a program that combined therapy, exercise and education was for CNP patients.

Patients with neck pain for at least 12 weeks were evaluated, and 43 fit the criteria and were randomly assigned to one of three groups. Over one month, all participants received two treatment sessions per week, for eight sessions total. The control group received various manual therapy techniques, in which the physical therapist performed movements and mobilizations of the neck. Experimental group 1 received the same treatment, but with the addition of two patient education sessions, which were meant to improve patients' beliefs about pain and disability, and to promote coping strategies and independence through activities. Experimental group 2 received the same treatment as group 1, but also was given an exercise program. This consisted of strengthening and stretching exercises for the neck, and was to be performed at least once daily for eight weeks. All patients were evaluated for neck disability and other variables before the intervention and 16 weeks later.

All groups were found to improve in various measures immediately after treatment and at the 16-week follow-up; however, experimental group 2 experienced the greatest improvements overall in neck disability scores, as well as in measurements for fatigue and neck muscle endurance. Experimental group 1 performed better than the control group, which suggests that the addition of education did in fact lead to greater improvements, but experimental group 2's superior overall performance shows that exercise is also a necessary component of treatment. The results of this RCT highlight the importance of combining various elements in a treatment program for CNP patients, and show that education and exercise are beneficial in helping to obtain the best outcomes for patients.